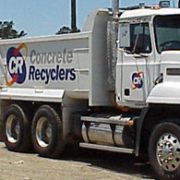 Concrete Recyclers is one of Sydney’s leading recyclers of brick and concrete in the building and construction industry. It is a very busy operation that has hundreds of truck movements receiving and delivering construction materials to and from their yards daily throughout Sydney. A key aspect of the operation is efficiently processing the trucks through weighbridges at the yards.

The sheer volume of trucks makes this a challenge every day, and from time to time these trucks were left queuing for hundreds of metres down the road when the company’s aging in-house computer network and backup solution suffered outages.

The business also relies on its IT system to manage all day-to-day operations, from processing sales and orders to managing pick-ups and deliveries, so an outage would mean significant downtime costs.

“It immediately creates a loss in revenue to the business and that can be significant – tens of thousands of dollars – in a short period of time,” said Craig Long, General Manager of Concrete Recyclers (Group) Pty Ltd.

Furthermore, not being able to process transactions would have a knock-on effect on Concrete Recyclers’ private enterprise and government customers, and their construction projects. Outages in the past that lasted up to several days amounted to immense losses for Concrete Recyclers and its business ecosystem.

“That’s not just the loss in downtime for our staff but sales and tipping of products through our yard. Such delays caused to our customers have a significant impact on our reputation and direct effect on our existing and future business,” Long added.

In a move to eliminate any further delays, Concrete Recyclers worked with Sydney-based managed service provider and Community Partner of the Year Golden Datto winner, Interlinked, to implement the Datto SIRIS. The solution solved the company’s replication issue and provided a complete business continuity solution. With the SIRIS, the business can spin up failed servers to the device or the Datto Cloud within seconds through instant virtualisation technology. Downtime from server failure is also no longer a concern.

The new system was put to the test when the company suffered a recent ransomware attack. With their network locked up, the company was again unable to process transactions and trucks began to line up. However, unlike previous instances, Interlinked was able to restore Concrete Recyclers’ system within the hour using the last backup taken shortly before the attack.

“We were able to reboot the system through Datto, otherwise we could have been potentially down for days rather than an hour if the previous system was still in place,” Long said.

With Interlinked and Datto, the company no longer worries about long periods of downtime, or losing construction customers to other competitors. In turn, its customers can complete their work on time, avoiding building delays at sites across greater Sydney.

“Appointing Interlinked as our IT partner has allowed our company to go through a digital transformation, which successfully increased our workload through put by 30% whilst decreasing our human resources costs by $300,000 per year. These were made possible by the enhanced efficiencies and uptime provided by Interlinked,” Long said.

“We’re very confident now that we’ve got state of the art technology – we’re now leading edge in hardware and software, and the latest addition to that was the installation of Datto,” Long added.

“On top of that, Interlinked’s fully managed service agreement gives us confidence that we have the support and backup we need to be up and running very quickly, eliminating any potential downtime and loss of revenue.”

This site uses cookies. By continuing to browse the site, you are agreeing to our use of cookies.

We may request cookies to be set on your device. We use cookies to let us know when you visit our websites, how you interact with us, to enrich your user experience, and to customize your relationship with our website.

Click on the different category headings to find out more. You can also change some of your preferences. Note that blocking some types of cookies may impact your experience on our websites and the services we are able to offer.

These cookies are strictly necessary to provide you with services available through our website and to use some of its features.

Because these cookies are strictly necessary to deliver the website, refuseing them will have impact how our site functions. You always can block or delete cookies by changing your browser settings and force blocking all cookies on this website. But this will always prompt you to accept/refuse cookies when revisiting our site.

We fully respect if you want to refuse cookies but to avoid asking you again and again kindly allow us to store a cookie for that. You are free to opt out any time or opt in for other cookies to get a better experience. If you refuse cookies we will remove all set cookies in our domain.

We provide you with a list of stored cookies on your computer in our domain so you can check what we stored. Due to security reasons we are not able to show or modify cookies from other domains. You can check these in your browser security settings.

We also use different external services like Google Webfonts, Google Maps, and external Video providers. Since these providers may collect personal data like your IP address we allow you to block them here. Please be aware that this might heavily reduce the functionality and appearance of our site. Changes will take effect once you reload the page.